Enjoy the Goodness Without the Guilt

“Hey, we’re firing up the grill to cook dinner, want to bring something and join us?”

That’s a common invitation we hear from friends in the summertime. And it begs the question – what would you bring? Cookouts in Wisconsin are a beloved tradition, especially following our long, cold winters. But they can also be known for their high calorie dishes. So how can you enjoy all the goodness of grilling out, without guilt? Brenda Leigh, MS RD, a registered dietitian and exercise physiologist with ThedaCare, offers a few tips.

1. Opt for More Fruits and Vegetables

“We often shock our friends when my family arrives with vegetables and fruit and no meat,” said Leigh.

Many people think that grilling is a healthier way to cook meat, but that is not always the case.

Leigh explained, “Higher cooking temperatures can cause chemical reactions that produce dangerous compounds called heterocyclic amines (HCAs) that can damage our DNA. These compounds have been proven to cause cancer. Grilling meat also produces polycyclic aromatic hydrocarbons (PAHs), another carcinogen, when fat from the meat drips unto the heat source causing smoke, which attaches to the meat. Essentially the hotter and longer a meat is cooked, the more HCAs and PAHs are produced.”

“Cut the vegetables into one-half inch slices or chunks. Coat them lightly with a light salad dressing, canola or olive oil, season with your favorite spices and then place the vegetables on an oiled grate or in a grilling pan, wok or basket and grill them on low to medium heat until they’re lightly browned, turning them only once. Many of the smaller veggies will only need five to seven minutes to cook. You’ll be amazed at how fresh and great they will taste!” Leigh said.

Root vegetables, such as beets, winter squash, potatoes and sweet potatoes also grill nicely. She suggests coating them lightly with oil, seasoning, wrapping in foil and grilling for 20-45 minutes.

Another option is to put the veggies onto a skewer and mix them with a few chunks of chicken, steak or shrimp to create a kebab. Brush with oil, a light salad dressing or fruit juice and enjoy. “Make the plant-based food the main focus of your meal versus meat,” Leigh suggested.

For those who simply don’t want to give up meat, Leigh has several suggestions:

Marinating the meat decreases fat drippings and thus the production of the PAHs. Leigh recommends using more acidic liquids, such as vinegar, wines, low-sodium soy sauce, fruits and fruit juices, as opposed to oils in the marinades. Then add herbs, garlic, ginger, minced chilies or black pepper to add some spice to the mixture. “Marinades add great flavor!”

She adds one caution, “If you’re planning to pour some of the marinade over the meat after cooking, set that portion aside before you put the meat in the marinade. Otherwise you’ll put raw meat juices back onto the meat as you’re eating it and that can introduce bacteria that could cause stomach problems.”

She recommends marinating the meat from 30 minutes to a few hours or overnight, depending on how thick the cut of meat is. The acid in the meat can actually start to “cook” the meat slightly.

She especially recommends grilling apples, bananas, cantaloupe, pears, peaches and pineapples. She suggests cutting the fruit in half, removing pits and cores, coating lightly with canola oil and placing the fruit pulp side down on a clean, oiled grill surface. Sprinkle with a small amount of cinnamon or brown sugar after flipping the fruit. Typically fruit only needs three to five minutes on the grill, and it can burn easily.

Some of her family’s favorite grilled fruit desserts are:

Gas, electric or charcoal – which grill type produces less PAHs?  Experts say that gas or electric grills are favored over charcoal grills because it’s easier to control the temperature on those grills, and because charcoal makes more smoke.

“Grilling can be a great way to have fun times outdoors and bring out new some flavors in food, but we need to focus less on grilling meat. It’s time to put more food from our gardens or the farmer’s market on the grill instead of meat,” Leigh said.

Schedule an appointment with your primary care provider to discuss more ways you can maintain a healthy lifestyle. 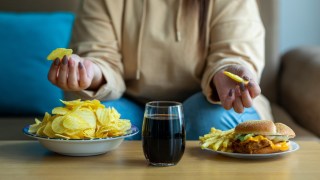 Put the Brakes on Emotional Eating 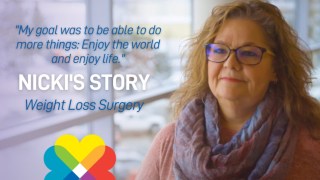 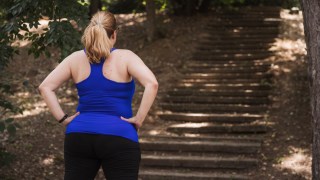 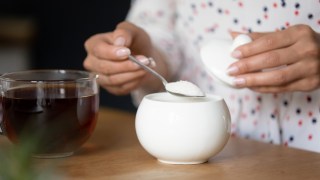 Sugar Can Appear in Sneaky Ways