Every October, Breast Cancer Awareness month serves as a stark reminder of the tremendous impact breast cancer has on women across the globe. In the United States alone, about 255,000 women are diagnosed with breast cancer each year and 42,000 women die from the disease.

It’s a somber reality for any of us, but for breast cancer survivor Kathy Micoley, it highlights the critical importance of preventive screenings and mammograms – measures she believes saved her life.

Those are three words then 60-year-old Kathy Micoley never expected to hear when she went in for her mammogram in August of 2019. She was healthy, had no family history of the disease, and had experienced no symptoms. She even admits scheduling her annual mammogram was something she did primarily to appease her doctor.

As it turns out, that appointment would result in the early detection of HER2+ breast cancer and set the course for Kathy’s treatment.

“A few days after my mammogram I received a phone call,” she recalled. “They told me not to worry, but that they needed me to come back in so they could take a few pictures. When I returned for my visit, they found a mass and were able to do a biopsy right way. It was cancer.”

Following the biopsy, Kathy underwent a lumpectomy which revealed she had cancer in her lymph nodes. The discovery meant she would need a combination of radiation and chemotherapy to treat her condition.

“Those were difficult days,” she said. “The uncertainty I felt from diagnosis to developing my treatment plan was the worst part of the entire journey. Chemotherapy isn’t easy, don’t get me wrong. But knowing you have a plan and are taking active steps toward recovery brings feelings of empowerment and hope.”

As the RN Clinical Manager in the Surgery department at ThedaCare Medical Center-Shawano, Kathy knew she was in good hands for the duration of her treatment.

“I felt so confident that things were going to go smoothly,” she said. “I never worried about anything going wrong while I receiving care at ThedaCare. I know personally how hard we work to continue improving our processes and standard of patient care.”

Having convenient access to quality care was equally valuable.

“I was fortunate enough to receive a lot of my care in Shawano, so I didn’t have a long drive,” said Kathy. “If I would have had to travel feeling sick or nauseated, that would have made it a lot worse. But my resources were all here.”

When she did have to travel for radiation treatments, she was greeted with a warm welcome at ThedaCare’s state-of-the-art Regional Cancer Center.

“The cancer center is such a beautiful place,” she said. “You go there not feeling well, and they are so efficient. It’s an atmosphere where everyone is in the same boat, and there is so much understanding. I always felt like people were interested in me and taking care of me the best way possible.”

During her treatment, Kathy also had access to a Cancer Navigator who was on standby to answer questions, provide patient education, introduce support services and link her with helpful community resources and agencies.

“If you need someone to translate some of the medical jargon or help you tap into resources, they are there for you,” she said. “It was comforting to know I had that safety net.”

Reaching the Other Side

Kathy received her final radiation treatment in March of 2020. She still takes an oral cancer medication and meets with an oncologist every three months, but can triumphantly say she is in remission.

Most recently, Kathy had the opportunity to serve as the honorary survivor for this year’s Making Strides Against Breast Cancer Walk for the American Cancer Society (ACS), which took place Saturday, October 9 in Appleton, WI.

“What all of us cancer survivors have in common is that since we have won our battle, we can help other cancer patients fight theirs,” she said. “There is nothing like a fellow cancer patient to help remind you that this will end. It won’t always be this way. It will get better. It’s so easy to become discouraged while you’re going through all of it, but we can remind them that there is another side to cancer.”

Inspiring Others Along the Way

“Get your mammograms as scheduled, religiously,” she said. “I am so fortunate. I caught a break because thanks to early detection, the cancer hadn’t spread to any of my other organs, and my prayers were answered at that PET scan. But who knows how advanced it might have been if I’d waited. In another year, I’m certain it would have spread. If you’re in need of a mammogram, go as soon as you can get in, and never cancel an appointment. I was so certain I would never get breast cancer. There was no reason to think that I would. But I did.”

“Following Kathy’s abnormal mammogram, she was diagnosed with an aggressive – but early – stage HER2+ breast cancer,” said Dr. Starr. “Because of early detection, we were able to treat her cancer with adjuvant chemotherapy and Herceptin. We’re happy to report she is currently cancer free.”

Kathy shared that her story is already helping to inspire others in taking a proactive approach to care.

“The most gratifying part of this journey is that after my diagnosis, people would come up to me and say ‘because of you, I had a mammogram,’” she said. “That was the best outcome I could have hoped for from this whole scenario.”

Don’t delay preventive care. A routine mammogram could save your life. 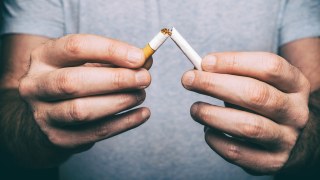 How to Quit Smoking for Good 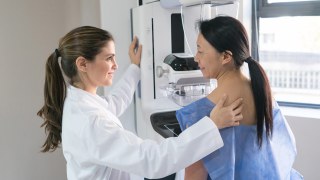 Staying Ahead of Cancer 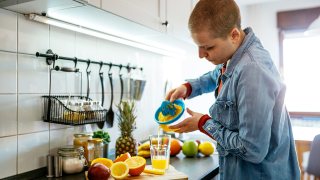 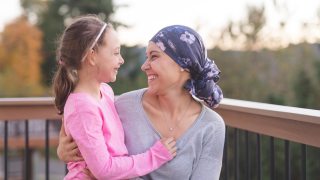 5 Ways to Improve Quality of Life After Cancer